Safe Selection and Handling of Fish and Shellfish

Where Foodborne Illness Begins… and the New Federal Rules Designed to Help Prevent It.

September is National Food Safety Education Month, a time to focus on questions like: Where does the contamination that causes foodborne illness begin? If you guessed “in the kitchen,” you’d be missing a big part of the picture. Although disease detectives can discover germs and toxins from contaminated food that has made people sick in the kitchens of private homes and restaurants—these places are not necessarily where harmful viruses and bacteria enter the food. 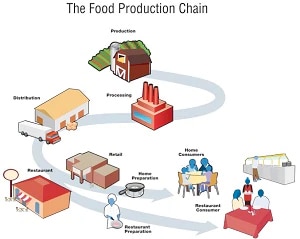 Food contamination can occur at any point along the food production chain—on farms, in food processing facilities, during transportation and storage, or at grocery stores and restaurants. Certainly, safe food handling in the home does play a critical role in preventing food poisoning. That’s why government agencies are actively providing consumer education and information on safe food handling.

However, a look at some of the foodborne illness outbreaks over the past year shows that the food was contaminated before it entered the home:

Instead of reacting to outbreaks after they occur, FDA’s new rules under the Food Safety Modernization Act require facilities that manufacture, process, pack or store food for humans or animals to:

Under the new rules, farms that grow, harvest, pack or hold fruits and vegetables must follow science-based minimum standards for the safe growing, harvesting, packing and holding of produce on farms to minimize contamination.

These new rules apply to both imported and domestic food products regulated by FDA. Food importers have to verify that their suppliers are meeting the same U.S. safety standards required of domestic producers. In addition, foreign facilities can have accredited certification bodies conduct food safety audits and certify that their systems meet U.S. standards for the safe production of foods for humans and animals.

The new rules require companies involved in transporting human and animal food—shippers, loaders, carriers by motor or rail, and receivers—to use specified sanitary practices to ensure the safety of that food.

Finally, the new rules require companies to create a food defense plan that identifies where their facilities and systems are vulnerable to intentional adulteration, and put the put into place the processes needed to prevent or minimize the possibility of such contamination.

These new rules will help keep contaminated foods out of the marketplace and out of people’s homes. But that doesn’t lessen the importance of safe food handling by consumers in the home. Contamination can occur or spread in the kitchen. Never ignore the four simple steps to food safety.

Bacteria can be spread throughout the kitchen and get onto hands, cutting boards, utensils, counter tops and food. To ensure that your hands and surfaces are clean, be sure to:

Cross-contamination can occur when bacteria are spread from one food product to another. This is especially common when handling raw meat, poultry, seafood and eggs. The key is to keep these foods—and their juices—away from ready-to-eat foods. To prevent cross-contamination, remember to:

3. COOK: Cook to the right temperatures

pages to share your thoughts and start a conversation.